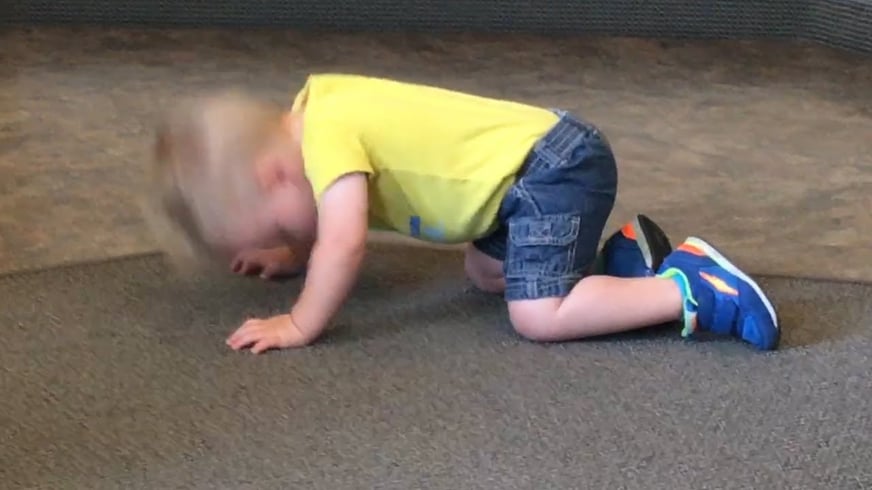 Head banging, head butting, head rolling, and body rocking are all common rhythmic habits for babies and toddlers, as is thumb sucking. Many believe that rocking and head banging act as a calming mechanism for young children. While head banging can be a normal behavior for infants, when combined with developmental delays it can be a sign that a child should be screened for Autism Spectrum Disorder.

In this post, we discuss when and why head banging occurs, preventative measures, and when to speak with a medical professional about the behavior.

To understand why young children engage in repetitive motions, like head banging and head butting, we first need to understand what actions they are replicating.

All infants are rocked by their mothers while in utero, which progresses to enjoying being held and rocked in a parent’s arms. As children grow, rocking toys, exersaucers, tricycles, slides, amusement park rides, bumper cars, and bike riding are manifestations of this kinesthetic drive—joy in movement—because these activities engage the vestibular system of the brain. The intensity, duration, and type of movement that provides pleasure varies from child to child.

Baby and Toddler Head Banging: Why it Occurs

There are several possible reasons why young children engage in head banging behavior. Here are some common examples:

In general, children do not head-bang in order to injure themselves.

How Common is Baby Head Banging?

Up to 20 percent of healthy babies and toddlers have a head-banging phase. This is not a concern if your child is healthy and only head bangs when going to sleep.

That said, head banging, head rolling, and body rocking activities are far more common in children with developmental delays, children with an autism diagnosis, and children who may have suffered abuse or neglect.

Boys are three times more likely to be head bangers than girls.

However, head banging behavior is atypical if it persists beyond the early years or if it results in serious injuries.

In typical childhood development and behavior, a child who is still head banging beyond age three should be medically evaluated.

How do you know if head banging is a sign of autism?

These five behaviors are typically absent in children who may be diagnosed with Autistic Spectrum Disorder. If you are concerned, reach out to your pediatrician no matter your baby’s age.

How Can I Prevent My Child’s Head Banging?

If you’ve seen your child head banging, you likely want to prevent the behavior—and understandably so. Here are some ways you can help deter a head-banging habit:

**Please note that extra padding, pillows, blankets, or bumpers in a crib or bed should only be used with older children to prevent SIDS in infants.

How Can I Prevent Injury if My Baby is Head Banging?

Typically, healthy toddlers don’t seriously injure themselves with the head banging habit, because pain prevents them from banging too hard. However, some children have very high tolerance to pain and head banging could put them at risk for head injury.

If you are worried, talk to your pediatrician. You can record a video of your child during the episode and show it to the doctor to discuss possible solutions. For some children, pediatricians will recommend a helmet if head banging is severe enough to risk injury by contact with a hard object. In most cases, this action can be controlled or modified with a good behavioral approach.

Carola, a native of Chile, is responsible for the supervision of all trainings created by the Sunny Days’ Clinical Education Team, as well as for the creation of new trainings focused on refining the clinical skills of the Sunny Days’ practitioners in New Jersey, New York, Pennsylvania, Delaware and California. She also trains Early Interventionists via live webinars that are announced on our site. A bilingual English/Spanish Physical Therapist with more than 30 years of experience in the clinical field, Ms. d’Emery is also a former member of the New Jersey State Interagency Coordinating Council. Dr. d’Emery joined Sunny Days in 2007 as Targeted Clinical Educator, and became the Director of Training and Clinical Quality Assurance in 2019. She has a PhD in Movement Sciences from Columbia University and a MPT in Kinesiology from the School of Medicine of the University of Chile. She is a member of the International Society of Early Intervention and of the New Jersey Chapter of the American Physical Therapist Association.

How Our Senses Affect Behavior

How to Perform Routines-Based Early Intervention

Many state-run early intervention (EI) programs operate on a routines-based treatment model, such...